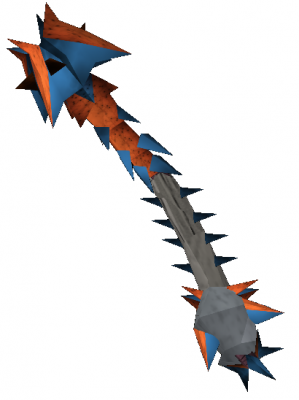 This representative of Drygore weaponry is by far the best weapon in RuneScape when it comes to maces. It drops very rarely and you have to really work hard to get it out of Kalphite King, as he is the only one that has it in the locker. You can spend a hefty fee of 14 million coins to get it from the Grand Exchange as well. If you are fighting Kalphite King with your friends using CoinShare, then the mace will appear in the form of 120 Drygore mace shards, split equally between all of the players. The same amount is required to create the weapon from scratch.

As you have probably guessed, this one is of crushing style. Damage of 864 and Accuracy rating of 2458 make it a sound addition to your murder pack of weapons. You can freely use the mace for at least 5 hours of combat, due to it containing 60,000 charges and consuming 2 per one hit. 90 is the tier of Drygore mace and it surely fits into the category of elite weapons which are either super expensive or hard to obtain through slaying monsters. The chance of it dropping is also rare but you probably wouldn’t mind if a rapier or longsword of the Drygore series be handed to you instead of the mace.

You can get an off-hand version of the weapon and wield two of them at one time, increasing your DPS rating. It is worth noting that only Dragon Rider amulet and body have higher rating of prayer than Drygore mace. And, if you use fury with this weapon, you will notice that the game uses a non-crushing sound for this ability, despite the style of the mace.