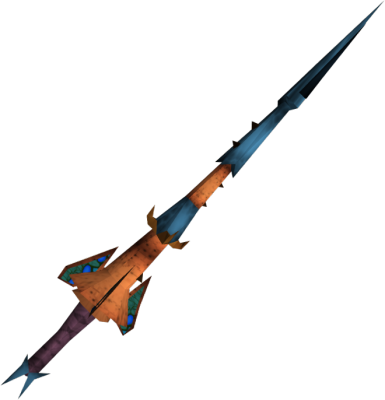 A masterpiece among the Drygore set, this rapier is one of the best melee weapons RuneScape has to offer and the strongest of its kind that can be found out of Daemonheim. Its stunning look is matched by the stats, 1102 and 2458 for Damage and Accuracy respectively. To wield this beauty, your character has to have no less than 90 Attack and guts to overcome Kalphite King, who drops the weapon. If you want to go the easy way, Grand Exchange offers a price of 14,000,000 for the Drygore Rapier. Right after the launch of this murder tool, it could cost up to a half of a billion, but as more players manage to defeat Kalphite King every day, the price slowly declines over time.

30,000 charges mean 5 hours of combat and more. Just like any Drygore weapon, you can repair it with 10,000 chitin scraps which would cost you 1,000,000 coins if you happen to buy them on Grand Exchange. Direct repair has a base price of 3 million coins and can be reduced through increasing Smithing level and doing the repair in player’s own house.

If you decide to disassemble this piece of magic, you would probably be happy as there would be no junk whatsoever and plus 27 XP will be dispatched to your character. You will most likely get base, metallic and blade parts. If you’re lucky, some dextrous and precise components may drop as well, but the percent of that happening is 2 and 3 respectively.

Use the comment section to tell us what does it feel to wield such a weapon and how hard was it to kill the Kalphite King or how much time you spent accumulating such a vast sum of money! We’re sure that community will be grateful.