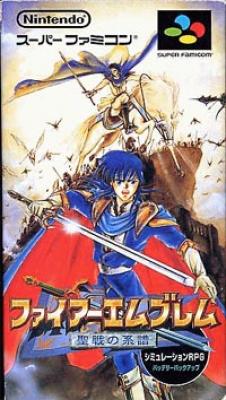 Fire Emblem: Genealogy of the Holy War is a tactical role-playing game developed by Intelligent Systems and published by Nintendo for the Super Famicom home video game console in 1996. It is the fourth installment of the Fire Emblem series, and the second to be developed for the platform. It is also the first entry not to use the continent of Archanea, featured in the original Fire Emblem and its sequels, as its setting. Genealogy of the Holy War takes place on the continent of Jugdral, split between eight different countries founded by the Twelve Crusaders, an ancient group of soldiers who ended the rule of the ancient dragon Loptyr with divine aid. In the present, a cult working to revive Loptyr stir up war among the countries. The story is told over two generations — the first generation follows the Grannvalian prince Sigurd, while the second follows his son Seliph as he works to defeat the cult and avenge his father. Gameplay follows the traditional Fire Emblem system of tactical battles taking place on grid-based maps, while adding the Weapons Triangle and Support systems, which directly impacted both gameplay and story.