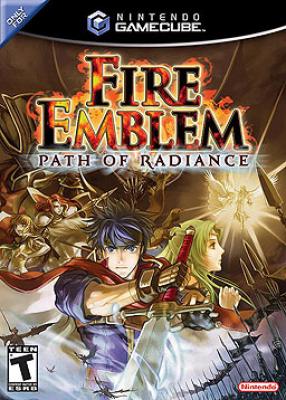 Fire Emblem: Path of Radiance, known in Japan as Fire Emblem: Sōen no Kiseki, is a tactical role-playing video game developed by Intelligent Systems and Nintendo SPD, and published by Nintendo for the GameCube home console in 2005. It is the ninth main installment in the Fire Emblem series, and the third to be released in the west. As with previous installments, gameplay revolves around positioning characters on a battlefield with the aim of defeating an opposing force. If characters are defeated in battle, they are removed from the rest of the game. The story takes place in Tellius, a separate world from other Fire Emblem games. Tellius is a continent inhabited by the humanoid Beorc and the shapeshifting Laguz. The game begins when the Beorc nation of Daein invades Crimea, a fellow Beorc nation. The protagonist, a mercenary named Ike, discovers Princess Elincia, the last heir to the throne of Crimea, and begins a journey to restore her to the throne. Ike and his group travel across Tellius to form alliances with the other countries and free Crimea from Daein's control, confronting racial tensions and long-standing resentment between the Beorc and the Laguz along the way.