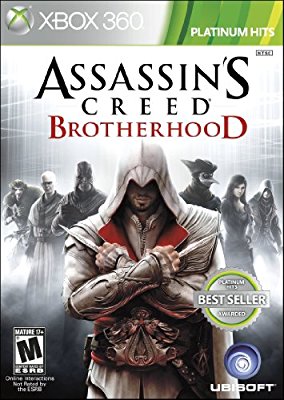 Assassin's Creed Brotherhood is a 2010 action-adventure video game developed by Ubisoft Montreal and published by Ubisoft. It is the third major installment in the Assassin's Creed series, a direct sequel to 2009's Assassin's Creed II, and the second chapter in the 'Ezio trilogy'. The game was first released on the PlayStation 3 and Xbox 360 in November and December 2010, and was later made available on Microsoft Windows in March and June 2011. The plot follows the centuries-old struggle between the Assassins, who fight for peace with free will, and the Templars, who desire peace through control. The framing story is set in the 21st century and features series protagonist Desmond Miles who, with the aid of a machine known as the Animus, relives the memories of his ancestors to find a way to avert the 2012 apocalypse. The main story takes place immediately after the plot of Assassin's Creed II, featuring Assassin Ezio Auditore da Firenze in 16th century Italy and his quest to restore the Assassin order, and destroy his enemies: the Borgia family.