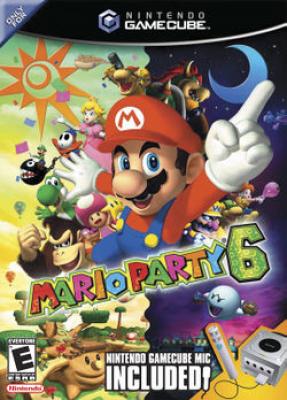 Mario Party 6 is the sixth title in the Mario Party series made for the Nintendo GameCube and the third installment for that console. As the series's namesake, the game is a party game that features various Mario characters navigating through a digital boards using Dice Blocks. This game is developed by Hudson Soft and published by Nintendo. The game is the first in the series that features an installment of voice controlled mini-games using a packaged microphone, where an all new Mic Mode is designed specifically for microphone use; the microphone would later be reused in the next console installment, Mario Party 7. Additionally, Mario Party 6 supports the Nintendo GameCube's progressive scan mode. The main focus of this game is collecting Stars to stop the conflict going on with the sun and the moon to fill the Star Bank. A new feature introduced to the Mario Party series is a day and night system implemented for boards and mini-games, a concept first introduced in Horror Land in Mario Party 2. As other Mario Party games, up to four players can participate in board gameplay and mini-games, where they can battle free-for-all or team up against each other. Mario Party 6 requires 5 blocks on the Memory Card to save the game, and up to three game files can be saved on the Memory Card.