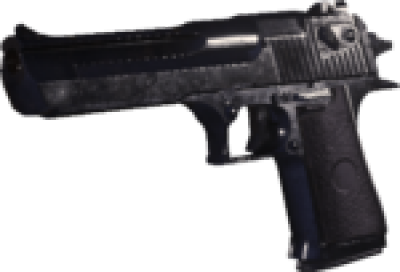 The Desert Eagle appears as one of the four side arms available in game, It is the most powerful and also the most rare sidearm in the game. The only level in which the Desert Eagle is available is "Crew Expendable". The Desert Eagle can only be obtained during the campaign if the player runs ahead of the other S.A.S. members in the first cargo hold of "Crew Expendable", at which point an Ultranationalist leaps out of a storage container, armed with a Desert Eagle, and he will drop a second one when killed; it is possible to use both of them interchangeably. It is also seen being given to Khaled Al-Asad by Imran Zakhaev, who then used it to execute President Al-Fulani in "The Coup". A Desert Eagle is also seen being wielded by Imran Zakhaev himself during "Game Over" where he uses it to execute a number of injured S.A.S members, including Gaz. It can also be obtained by using the "give all" console command on PC during the levels "Safehouse" and "Game Over". A two-tone Desert Eagle can be seen in the armory in the mission "F.N.G."