Darius from Best Top Laners In League of Legends 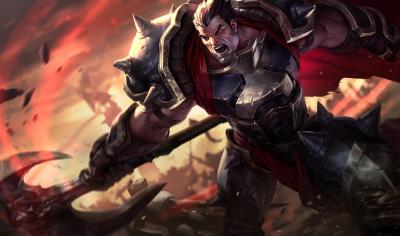 I don't know what the cuddling syndrome might be (not even sure if you just invented that notion). He's actually not that strong outside of lane, and thing is most people complaining about him still being too strong in the current meta think they can fight him at all point of the game without being punished. People seem to know by now how to fight him (dodge q, disengage when he has too much stacks), but the majority of them still don't know when to fight him.

Don't you just love it when the guy feeding him the whole laning phase just gives him full stacks in teamfights? Now THAT'S cuddling. I also don't think the guy knows the difference between cuddling and coddling.

They are nerfing the wrong things, so litterally if this goes live, you only pick Darius for the ult? Okay, I would rather pick other champions if this happens. Darius is not a healthy champion but he was in an okay spot pre-nerf. He abuses low elo but he is very weak against melees since the update, I always beat him 1v1 and team fights with melee champions since the update. Now he would probably be weak against assassins (which is not good). His basic abilities are awful, nerfing it will make him worse. What they should have done was... 1) Lower the AD scaling on his passive because it's too high and it the bleed should not give armor reduction from black cleaver. 2) Raise his base AS to compensate for the passive nerf. 3) Change the Q's handle damage to 60%-70% damage, but increase the mana cost and remove the heal, instead it should grant 2-3 bleed stacks (and maybe increase the base damage from the outer handle instead 4) The slows on W and E removed and placed onto the Q instead to make it similar to a cassiopia ultimate, instead enemies are slowed in handle range, meanwhile they take more damage from in outer range. 5) Give apprehend base damage and an AD ratio to increase the damage (that can also apply stack to his bleed) 6) Remove the true damage on ultimate and replace it with physical damage. It would not matter that much if Darius have armor penetration in his E. Also, colossus benefited pretty much everyone with hard CC in their kit (including Jhin) the ones without shield the most. I would agree that strength of the ages was a healthy and balanced mastery, pretty much everyone can use it so it is fair, as for colossus, just remove it, its is very unnecessary anyways.

Sadly he suffers from the common cuddling syndrome. Build tanky because you get so much free damage it doesn't matter. Black cleaver, sterak's rage, deadman plate, frozen mallet, all HP/AD and you're a tanky bastard with enough AD to make half the team wanna uninstall. Sure you can counter his Q a bit by sticking close, but even if you do, the bleed, W reset and then ult will kill you anyway.

Is Darius too strong or unfair? His kit is certainly fair, his numbers are certainly not. Mundo can get away with 200 bonus ad because he has no ad scaling abilities, only autos; and attack speed items are too awkward for him to buy to abuse it. Darius on the other hand boasts double percent armor pen with BC(item) plus e, and heavily high ad scalings on his other 4 abilities. He needs to have less super-scaling on his self-ad boosting kit as a fighter/tank. If you ask me, his q healing is fine because ->missing health;- grievous wounds applications from morellonomicon hits him while he's on low health, in addition there's an adc/ad item available to lesser the heals. His e should shred the armor of targets hit for the same amount for 5 seconds, not be the constant passive that it is. His full-stack Hemorrhage, or 'Noxian Might', no longer would give Darius any bonus ad, to avoid bloating of damage scaling. Instead it would grant him 50-250 bonus on hit physical damage to his autos, and 25-150 damage to his ultimate, hemorrhage up to doubles his ultimate's damage as normal(same damage on ultimate as before; 200 ad x 1.50 = 300). The ad scaling on w makes this 50-250 on-hit damage roughly the same damage as before.(3 autos with w was 200 x 3.4 = 680. Now that would be 250 x 3 = 750; note the 200ad to the bleed damage lost makes this small consecutive autos buff a sensible addition for one-on-one fights). tl;dr: His full-stack passive would therefore not give any of it's additional AD damage to his bleed or q, but would still increase his autos and ultimate damage as before when activated. His e only shreds armor of enemies it hits instead of just passively. These changes keep his build-up for-resets strengths a thing, but removes his rediculous 'free' damage he gets for tagging you once with q while in power mode. The q will already heal him for a lot, he doesn't need to get another 580 physical damage per target hit from the Noxian Might 200 bonus ad alone(150%bonus-ad +140%"bonus"ad x200ad = 580). For reference this is about the same damage as the active of a titanic hydra on a 5k-hp full tank(which is a 20sec cd), only with 25% free armor pen at the least on top of that as well. I think Darius should get less benefit from explicit rush down in fights, requiring his team's help to set up for his reset rampages. Just because there's counterplay for him from ranged sources, doesn't make his strengths vanish. There's no denying he's above the pack for Juggernauts, and every champion has a counter to it, Darius is simply just too strong when he's not countered. ps. the actual TL;DR: Darius has an advantaged fight against most toplaners even without his 5 stacks, therefor his 5 stacks' effect should be weakened, most especially versus healthy targets in teamfights. (ps. ps. weakening Darius' base damage or effectiveness when he's not supermode instead, is dangerous because there are some matchups he is all but completely denied his 5stack against. Doing this would relegate Darius to a nasty counter pick champion, which he already slighty is, instead of something generally viable, which goes against fun play and puts the game more into champion select and not player matchups. That is arguable unhealthy game design.)

It's not even the scaling on his abilities that I find unfair, it's rather the mana costs: 30-50, 30, 45, 100-0. "Darius has an advantaged fight against most toplaners even without his 5 stacks" Imo, that's because of his ability to outsustain his opponent (low mana costs and in-built heal).

The problem with Darius is how Tanky he is when he also deals insane amounts of Damage and has a true damage execute and 500% damage passive. He's only weakness is that he's slow but he can also slow you down 90% and pull you to him? so How do you fight this guy if you're melee??

If you in lane as mele go with darius you will f*ck up for darius is a bully lane ,he is a juggernaut so he has advantage . you have two choice accept farm in peace with him , don't let him pull but you will lose some minion and call jungle camp this lane . and pick a champ with quick trade or gap close like riven , trundle , renekton , few counter in mele . or you simply pick range like kenen , kayle ,swain , jayce .. darius no chance to beat you at you keep him distance and don't push lane to high and you will get gank .

From personal experience, Renekton can be a solid pick against Darius. I've also heard that other highly mobile duelists like Riven and Fiora can do well against him.

"Darius - Decimate (Q) handle hit damage lowered to 35% from 50%" Not only I am concerned about Darius got riot's attention on the PBE but what the heck is this change? The handle damage on live is already almost zero but now they nerf it even more? Darius strong winrate came mostly from colossus and not because of his kit. I fear unneccessary nerfs for him.

one of the best juggernaut currently . he bully EVERY top mele champion and with new mastery his shield is pain in the ass with he need pull every one in front of him . this nerf let opponent more chance to outplay him , beside darius player need to careful to use his q . fair enough

He's right to be concerned - riot's repeatedly tuned the wrong things, and just abandoned those they shanked when they finally tune the right thing. Like how people who benefitted too much from devourer and/or guinsoo's have had to be retuned or still not recovered - I believe master yi is on the topic of getting a buff? And colossus was a horrible idea - this coming from somebody who loves engager tanks - so when they finally DO adjust it, and darius who was never intended to have the shield no longer has it,they'll have to tune him again. But probably won't. For a long time. And when they do, they'll probably not want to admit it was a mistake and tune something completely irrelevant, like buffing his mana regen.

Should be interesting to see. The shield still doesn't seem decreased enough. Honestly, I think they should nerf the trigger radius, so you actually have to be properly surrounded to benefit.