Fiora from Best Top Laners In League of Legends 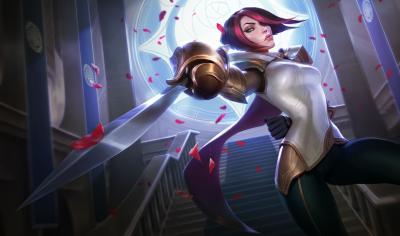 The most feared duelist in all Valoran, Fiora is as renowned for her brusque manner and cunning mind as she is for the speed of her bluesteel rapier. Born to House Laurent in the kingdom of Demacia, Fiora took control of the family from her father in the wake of a scandal that nearly destroyed them. House Laurent's reputation was sundered, but Fiora bends her every effort to restore her family's honor and return them to their rightful place among the great and good of Demacia.

How good is fiora right now? I have half my friends saying she's still pretty good, the other half saying she isn't as good right now.

She's strong right now. Buffs to various core items she currently builds and the rift herald changes allowed her to be even stronger in the department she excels, split-pushing. In terms of laning, very few champions are considered hard matchups for her, even her hard counters will eventually fall off in a 1v1 once she gets her core items. Most of the matchups are "skill matchups", depending on how well you use her entire kit, which can be tricky cause matchups are played very differently from one another. That's also why she doesn't appear as strong as she can be in the right hands, cause she has an extremely high skill cap AND a steep learning curve. If you're not scared of putting hours before finding consistent success, then play her. TL;DR : she's top tier if you play her a lot.

She isn't bad. Can't really fail that hard with % Max Health True Damage. It's more a case that other champions are offering better bullshit cheese than Fiora does. Doesn't mean she is bad. Just practice her, skill is what makes a decent champion better than the current meta-cheese picks. Even if she is shit in your hands now, keep trying. Soon you will baguette better at her.

I suppose, then, it's all about practice. I just hope it's not one of those champs that I suck at no matter how much I practice.

If you use Fiora's E, you have a super small window to reset her AA through another source so the, what should be a guaranteed crit, never crits no matter what. It feels like a 3 frame window between the cast of E and the cast the other AA reset when at 1.29 AS (before E buff) and with 37 ping, though it may be higher or lower. There's no way to TAS League that I know of, so I can't tell you the exact frame amount.

I want to preface my post by saying I definitely do not think Fiora is OP or hard to balance, just annoying. Who is a good pick against if you have to lane against her top? From what I've seen, if you don't put her behind early and keep her there late, she WILL fuck you in the ass without lube, no matter what champ you are. I don't think there's a single champion that can deal with her late game shenanigans, and even in lane, if she plays super cautious and safe (like a little bitch), which makes it hard to take advantage of her weak early game, besides pushing her wave right in to her turret and roaming. Basically I'm wondering if I should view her like Nasus, where the best counterplay is to stomp her team hard enough to make sure the game doesn't go beyond 30 minutes.

Yeah, much of the same logic that applies to yasuo work on fiora, due to design goals. Honestly. I find it best to just coordinate properly to keep her ineffective and focus on the teamfights where she's less affective - but you need to balance this with the fact that she can go tower pushing, and kill most people who go alone to stop her. Beating her at her own game is so unecessary. But there are also skill matchups, where you can go riven against her, for example, and if you win, you have more flexibility in dealing with teamfights than she does. But that's still an if. I think olaf, similar to aatrox, can beat her through attrition; just build lifesteal instead of health, and you're good - though keep in mind how olaf scales with CDR. But she can still run circles around you, if you're not careful. To me, jayce seems like the best bet, since he can deny her the range she needs to keep dashing, and be a constant threat, but statistics disagree with me. The thing is, her true damage is negligible early on. It's not worth considering; the true problem is the mobility and health she returns for landing them. Malphite potentially straight out tank her as a result, and then transition to teamfights with little she can do. Kennen's stuns only apply if damage applies, meaning her ripostes will never stun as a result of his, which is a cheeky counter- and again, the teamfight transition. The sprint he has also makes it hard for her to gapclose, even when landing dashes and speed increases. So anyone who can survive lane - not win it, necessarily - and then function as teamfighters where she can't seem to be the best bet. That's for laning, though - if you pick strong teamighters elsewhere, you have that part covered elsewhere. Stomping her before 30 minutes - not necessarily, but fight team, yes.

My go to Fiora counter is actually Ryze. Just E the minions and she can't safely get near you. Abuse the MS he can get from two runes, and always wait on the snare. Since it's instant, it's literally all down to luck if she parries it or not, and it's in his favor. The only way you should die is if you misposition, or get caught without double runes and can't run. Not to mention his shield cuts her true damage down.