Garen from Best Top Laners In League of Legends 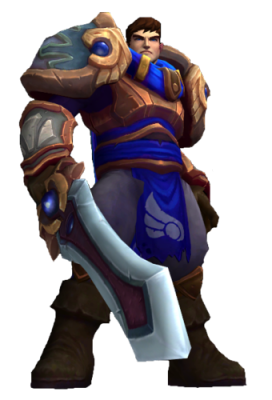 Garen is a warrior of Demacia who has devoted his life to defending his kingdom and its ideals. Armed with his magic-resistant Perseverance.png armor and Decisive Strike.png broadsword, Garen puts his life on the line for both his nation, and his fellow soldiers.

A nearly 4 second silence is too short? That's longer than a lot of the crowd control in the game, and sure it doesn't exactly make sense for it to silence them - Personally, I always just imagined he cut their throats - it still looks believable when animated. It fits it's name as a decisive strike, because if you manage to get it off on someone later game it tends to decide the fights. The biggest issue with his Q is simply that it's hard to catch people. The better option, over a new ability, would be to either make chasing easier, or to reward him heavier when he actually does make a catch. That's why I liked the passive idea, because it would make him stronger when he manages to get in close against people that typically just dash away. Heck, if he was given slow resistance, he would be outright terrifying. I outright disagree about his current Q being bad. In fact, given it's many uses and low cooldown, I think of it as the best ability Garen has, it's just also his least Iconic when compared to the spinning. His ultimate would need to be very heavily toned down if it was true damage. We've all seen how crazy his ultimate is against the villain, and executes in general are often just bad when they arbitiarily kill you if you're below a cetain health. It often results in a kit that needs a lot of power drained away from other places. It also allows a late game Garen to be more heavily rewarded for getting off his ultimate on squishy characters, since they have less magic resist. The ability was made and balanced around doing magic damage, switching it to true damage could just make it problematic for a long time to come. Then again, maybe I just like being able to build hexdrinker to 1v1 a Garen that's rushing sunfire.

I think the current buffs on PBE aren't enough at all, he needs more. I think he should get a passive on his ultimate that allows him to gain bonus movement speed while moving towards the villain, to fix some of his mobility issues he currently has. In terms of damage and defense he is fine. Also, 340 base MS for a champ like him is too low, it should be 350 as he only has his feet to close the gap.

TL;DR but I did see something about giving him, EVEN more, movement speed well Garen and Darius is known for being "KITABLE" so it would be beyond stupid to give them more mobility then what is the skill of kiting then?

Until his (E) Judgement deals lower damage than his auto in 3 sec this champion is dead no matter what...

Uh? Until his E does less damage than 3 seconds of autos? It seems like you have that backwards? If it did less damage than 3 seconds of autos to a single target, you'd only use it for wave clear. It already technically does less as long as you can get more than ~4 attacks per target in E AOE in over those 3 seconds. 6 if you're hitting the target by themself. That requires ~1.6 attack speed (+~60% ASPD) per target hit in the first scenario, meaning it's impossible to do the same damage output with autos if you're hitting at least two targets, but possible if you only care about the damage to one. If you're only hitting one target, you need about ~2 attack speed to beat out Judgement, but realistically that much attack speed is never going to gel with Garen. As for the buffs on the PBE, it will help him a ton. It will make him a bit harder to kite as well, for good players, as he can give himself a temporary +60% tenacity to shrug off a stun or an additional slow or something, as well as giving him some extra durability, without making him any stronger in low elos. Pretty good start, but he definitely does need more. He'll also be better at diving out of fights and coming back.

Can they please make Q speed only work towards champions like for example Kled, atm it's just a 5s slow cleanse runaway. On top of passive, it makes him turn into singed playstyle essentially.

True, I would get behind such a change. It's a bit unfair that such a tanky champion is able to escape so easily from dumb situations that his great damage can't kill his way out of. That said, he is meant to be simple "baby's first Juggernaut", so the simple speed boost is there to not over-complicate him.

His options are limited enough as it is. take that away and his only option is running into fights, which can already be a terrible option if he's bound to lose it. I wouldn't want it to become his dedicated int button.

Hmm, with the incoming Cleaver-Nerfs and buffs for both IE and ER, it seems to be crit will be a viable strategy for Garen again.

Garen rework idea Have mana, mana regen and mana costs Passive (Perseverance removed... Courage shifted towards passive): When being in combat for 3 seconds, Garen gains 20% damage reduction, deals 10% more damage and gains 20% movement speed until being out of combat. Q (silence and movement speed bonus removed): Garen instead reduces attack damage (by 30/35/40/45/50 plus 50%) for 4 seconds. Can freely cast this ability to targets that are knocked up, he leaps to them within 400 range and knocks them down + stun them (for 2 seconds), deals 25% more damage. (Does not share cool down with the first part of this ability, and only casted when targets are knocked up, this part of the ability does not lower attack damage) W Willpower: Garen swings his sword upwards, dealing physical damage to enemies in range (by 50/90/130/165/200 plus 40% bonus AD) knocking his target up (if they are not knocked up), can cast again if the target is knocked up. To anyone that is hit while being knocked up, they will suffer 30% of armor reduction and physical damage (by 60/100/140/180/240 plus 50% bonus AD) E: No longer removes armor, instead it randomly increases garen's movement speed by 25 50 and 100 percent during judgement (the movement speed bonus from courage does not apply until judgement ends). (Note: Critical hit damage removed) R: Magic damage changed to true damage (villan mechanic removed)

So Garen was designed to be simple to play as an entry level champion and all of your changes get rid of that. The complexity is far too much for someone who has never really played league. FOr this reason youd be better off just making a new champion rather than doing your rework.

Planters says exactly what I wish to say about this "rework," that is is better for a new champion than moving around the kit to perform better.

Beyond any of those issues, the entire design here makes no sense, not thematically, and not for gameplay. The rng on the E is just awful design. You should never have to pray to rnjesus to get a kill or make an escape. A Garen hitting E, getting lucky, and zooming away with 500+ ms, would actually just be stupid. Not to mention it makes his main damage tool into a gapcloser. The passive actually isn't bad as far as the in combat part goes, and I think with appropriate numbers, it could be a fun mechanic that rewards him sticking to fights, especially if he lost it if he wasn't the one attacking, that makes a very clear weakness in a really strong passive. The out of combat part is bad. Awful, even. You're just giving him free stats. There's no rhyme or reason for it, and it would be better to just make the rest of his kit better so that he doesn't win fights by pure statistical advantage. Q would be garbage in most situations. The AD reduction is too situational, the lack of movespeed means you need to basically pray to rnjesus that your E gives you movespeed to get it off, and the whole second part is unescessary and would just add to a kit that's got an enough stuff in it that would make CertainlyT cream his pants...then again, he designs cohesive kits, so I doubt he'd enjoy this that much. W triggers me. Not just because there's no reason for Garen to have a true combo with WW, not just because WWQQ would be the most toxic and antifun combo in the game whenever someoneone managed to get close, but because someone getting knocked up by a sword swing, no matter how powerful, is quite literally the dumbest thing I can imagine artists portraying. A swing that hard would cut someone in half, not throw them into the air. Everything else I said is still a problem though, and knockup gating in a kit in general is something that I would argue heavily against. R...no. I really do like the in combat passive idea though. Worth discussing, in fact, I'd really like if Riot did something like that.

the only part of garen's kit that could be changed would be his passive and w. Both arent particularly interactive. everything else has a purpose clear and distinct. the problem is that the passive is part of Garen's identity. any change to that would be difficult because it would be high risk high reward. As for the w, this is what helps make him a juggernaut. Because it gives flat armor/resistance Garen can forgo armor items for more health based items.

The thing is, his current passive is hardly a crucial part to either his kit, or his character. He definitely needs some way to sustain in lane because he's purely melee with no real capcloser, but the passive is just pretty bad, since it requires him to be out of combat and doesn't really help much even then. Garen's iconic play pattern is spinning like a beyblade, and the giant sword execute that actually shakes your screen it's so epic. I'm completely fine with Q and W as they are, because they feel pretty good. Although I think a nice QOL would be to have the W actually tell you how much damage is mitigated, like the gray numbers that pop up when you hit a shield. There's no reason to change those abilities. The passive, however, could be a chance to focus Garen's success case, which could make him easier to balance even at top level by giving him a situation in which he's meant to succeed, similar to Darius. Garen being continuously rewarded for being in combat through pure power increase is an interesting idea, and it would make sense why he would be one of the squishier juggernauts at the start of a fight. It may make his W a bit too strong, but some minor reworking on the way it works could fix that.