Renekton from Best Top Laners In League of Legends 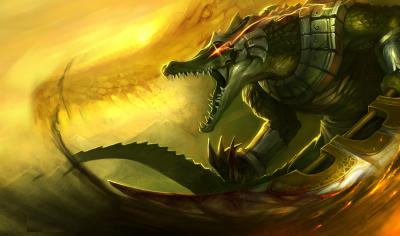 Renekton is a terrifying, rage-fueled Ascended being from the scorched deserts of Shurima. Once, he was his empire’s most esteemed warrior, leading the armies of Shurima to countless victories. However, after the empire’s fall, Renekton was entombed beneath the sands, and slowly, as the world turned and changed, he succumbed to insanity. Now free once more, he is utterly consumed with finding and killing his brother, Nasus, who he blames, in his madness, for the centuries he spent in darkness. Renekton was born to fight. From a young age he was constantly getting into vicious brawls. He had no fear, and was able to hold his own against much older children. It was often pride that led to these confrontations, as Renekton was unable to back down, or let any insult pass. Every evening, he came home with cuts and fresh bruises, and while his more scholarly older brother, Nasus, disapproved of his street-fighting, Renekton relished it.

If there is a champion that i like to play in every meta is the croc. But that aggro type of croc, with ignite, Tiamat into Black Cleaver. I like how after u get a bit of a lead u can bully people so hard, that sometimes i can get a 30-40 cs lead. But yeah, he has bad matchups, sadly.

Does anyone know the exact time frame between Renekton pressing W and until the auto attack enhancement ends (and the cooldown starts)? I've timed it myself to be about 6.5 to 7 seconds, between pressing W (not applying the stun) and when W goes on cooldown. Changed the wikia but was wondering if anyone knew it exactly, and can provide me with a source?

from pressing W to starting the animation, there's the variable based on attackspeed. I also don't know what bias his wind-up animation has relative to that. Then there's the combo.

While I agree that Ignite is pretty bad right now, his highest winrate has flash/ignite. Although I would probably go flash/tp or maybe even flash/ghost or flash/exhaust rather than flash/ignite.

Ignite makes perfect sense on him; he wants to win lane, win hard and then roam, and even though ignite falls of hard, it lets him do just that. Because HE falls off hard. Popping up at bot lane to cover for someone's fuck up, or run around and maybe get a kill isntead of pounding top while you're at your peak just isn't that valuable for him. It might be valuable for the others, but that begs the question why you're picking the croc in the first place. He already has an expiration date in game length, so you try to win while ignite is useful. Alternatively teleport so he can split push makes some sense, but getting ignite so he can just tower dive and do the same... Just seems better.

Against matchups like Vladimir, Dr. Mundo, and Swain, Ignite is the best because it puts even more pressure on them and cuts their healing (they are pretty reliant on sustain).

Some ppl are saying "Now renekton slice three times in his W" guys, renekton were ALWAYS, literally ALWAYS like this, the only diference is that all the 3 damages were calculated immediately at the same time in older versions.. if u cancel his w with an active item he will still deal the same damage. Dont worry little crocodiles

Is there an actual reason to why people rush damage items on Renekton? I mean, he is a great lane-bully by himself, and I have aprox 50k mastery points on him, almost always built him tank with titanic hydra (or no offensive item at all) and have had quite success on my toplanes.

I don't know why others do it, but I usually do it cause I like the extra oomph in the early game. His base damages are good, but his scalings are all BONUS AD, except his W. So base stats don't really help in the way of damage at all. Even just rushing Black Cleaver or something works, and honestly BC helps him in many aspects due to health, cdr, and the passives. That's just my observations and opinions though. I can't speak for everyone.

Well, that sounds fair, however I always build Visage (unless they have 0 ap on their team) and find that 10% of CDr enough. Personally, I prefer being a tanky beast that wrecks squishies and deals a considerable amounts of sustained damage to all of their members, and Sunfire, Visage + Titanic hydra almost always make the job. After that, deadmans plate and Randium omen also adds hp that translates to damage, and sometimes I even get Solari's for the CDr, the mr and the active (plus more hp, which is always great with Titanic). I used to build Ravenous a couple of seasons ago, but now I find myself getting much better results with just Titanic + full tank. Sometimes I consider getting Sterak's but still don't like it all that much.

I can see why you'd like that. Renekton still does good damage with his base values, and can be hard to kill. With Titanic Hydra you sort of get rid of the drawback of going heavy tank with at least your W and basic auto attacks. I still think I'm going to continue going Black Cleaver though, as I like having the high CDR so I can E-W-Q-E more often. It really feels good to harrass like that, and Black Cleaver allows you to do it more often AND get a speed boost for it. And yeah, I did the same. Ravenous Hydra was my first item on him and Olaf before. Might still do that on Olaf in games I can afford to. It just makes them so hard to keep down due to lifesteal. Sterak's though... it's meh. I think its best used for bruisers that want Sheen. They get more value out of it than Renek does, especially since it does nothing for his scalings.