Riven from Best Top Laners In League of Legends 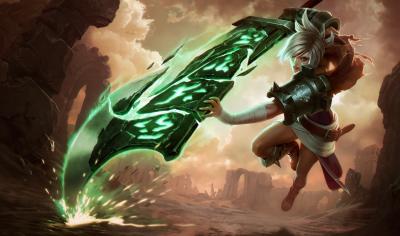 In Noxus, any citizen may rise to power regardless of race, gender, or social standing - strength is all that matters. It was with committed faith in this ideal that Riven strove to greatness. She showed early potential as a soldier, forcing herself to master the weight of a long sword when she was barely its height. She was ruthless and efficient as a warrior, but her true strength lay in her conviction. She entered battles without any trace of doubt in her mind: no ethical pause, no fear of death. Riven became a leader amongst her peers; a poster child of the Noxian spirit. So exceptional was her passion that the High Command recognized her with a black stone rune sword forged and enchanted with Noxian sorcery. The weapon was heavier than a kite shield and nearly as broad - perfectly suited to her tastes. Soon after, she was deployed to Ionia as part of the Noxian invasion. What began as war quickly became extermination. Noxian soldiers followed the terrifying Zaunite war machines across fields of death. It wasn't the glorious combat for which Riven trained. She carried out the orders of her superiors, terminating the remnants of a beaten and fractured enemy with extreme prejudice. As the invasion continued, it became clear that the Ionian society would not be reformed, merely eliminated. During one bitter engagement, Riven's unit became surrounded by Ionian forces. They called for support as the enemy closed in around them. What they received instead was a barrage of biochemical terror launched by Singed. Riven watched as around her Ionian and Noxian alike fell victim to an unspeakably gruesome fate. She managed to escape the bombardment, though she could not erase the memory. Counted dead by Noxus, she saw an opportunity to start anew. She shattered her sword, severing ties with the past, and wandered in self-imposed exile - on a quest to seek atonement and a way to save the pure Noxian vision in which she believed.

I think you might still want at least 90% gold efficent item till 3rd item... and a lot of core items have decent gold efficiency values.

The build path seems really good cuz u can buy an early bf sword to snowball your lead harder than buying phange for example.

I'm undecided on it. Mostly because I have so little experience with the effect itself, so I can't figure out the optimal situation to have it. Feels like it's most effective during teamfights, to me, since people can cover for me and you can get more value out of your risks without losing much. But getting it for shit like tower diving is a waste; either you don't proc it and you don't get enough out of the item because you're just getting the armour and AD for a high cost, or you just used a massive CD for a single kill... and might just waste it because people can collapse on you while you're ressing unless your team is there to cover you. So I'd say it depends on how soon you're planning to teamfight - and if you've gotten your essentials yet.

When someone asks me where to start top or jungle, I just direct them to this turd. It's almost as hand holding as Yasuo, without the aiming needs of Fiora. Best part of spamming Q is that you can take half of someone's HP early level and minions won't touch you. At level 2, do it again but stun this time. If anyone looks in your direction, spam Q to get away faster than Kassadin.

wat a noob. thats why so many silver/bronze (or even worst than bronze 5) rank players in this game

Well things are not nearly as you said,the way you presented it's too much safe(didn't you exaggerate the dmg a bit?),and you are not mentioning any retaliation,it's not like Riven has a lot of hp and there are champs that can blow you away at lvl 2(Aatrox,Darius...)

While Riven isn't as broken as fuck, there is obviously a reason why people bitch about her. They didn't just make it up out of nowhere. She does have a major amount of damage, mobility, cc and toughness (due to shield) which gives her a massive advantage over a lot of other champions. In this day and age, she can obviously be bursted, but you can't try and distract an argument by saying she is squishy when she can be so easily fed.

Sure you can. Stop "distracting the argument" and making the situation about when she's fed.

I am not talking about when Riven is fed. I am saying that Riven can get so easily fed, because of her inherent mechanics. I am not saying she is impossible to beat, but she does have an awful lot going for her.

Same logic applies to everyone who runs down lane and shouts nerf at the champion they're losing to. Because she's all-in reliant it's just more obvious since she can bumrush people early with her aggression. Same with Diana. Kinda same with yasuo. Maybe people should stop making it so easy for her to get fed.

The difficulty with not letting her get fed is the fact that you may begin to starve to avoid giving her kills. That doesn't stop her from farming. You can call in the Jungler but she still has her mobility for escapes. Would leave you a small window to farm, but it is not the nicest kind of situation. While a kill-starved Riven can be less of a threat later in game, it does not take that many kills for her to spring back to the front. It's all just the way her kit is that she has access to all the mechanics she really needs to dominate early and control the lane, bounce back if needed later and still be a threat throughout the game.

Diana can't bumrush you until she hits level 6, and even then she has to burst you down in a single spell rotation, where as Riven has much more sticking power thanks to the fact that her spells don't have as high of cooldowns. I really don't think Riven and Diana are comparable at all here. I don't think Riven is OP, though. I just think she's a fun-sucker, like Yasuo and Kalista. She just sucks the fun out of any game that she's in.

People need to know how to deal with losing lanes. Can't farm while you're dead either. I know some people stick their dicks in a hornet's nest and just keep doing it while complaining about balance; I like to call those people bad players. And Taco, Also, if you're expecting a 1 to 1 ratio in similarity, I can't help you. And no, Diana does, in fact, not require you to die in one combo. No more than Riven does. And a 6 second cooldown on a 420(+130% AP) spell damage combo isn't exactly downtime central.

It's even easier renekton. Illaoi, too. Why shouldn't they? Everyone has a venn diagram of pros and cons, what makes Riven so egregious? Renekton can't nuke you down at the same rate, but can do so more safely. Kills you in 2 blitzes instead of 1 all in, but with twice the health left, depending on circumstance. And if you're melee, Illaoi wins by default. Like, actually a legit reason to give up the lane.

Renekton is basically Riven if you sacrifice damage for tanky stats, but I don't think that makes him more oppressive. I still find Riven to be more anti-fun. Also yes, it's incredibly difficult if you're melee to win trades against Illaoi, but how can you die to her? She has no sticking power. Just walk away from her. Riven has much more kill pressure than Illaoi does.

Does she even have to kill you when she can stand between you and the entire minion wave? Even if she gets jumped she's built for clusterfucks, so she's just going to get that 2 for 1 deal. Get jayce and you can cuck them both with range and knockback. Hell I've even taken thresh top to deal with them since I can just keep autoing them and interrupt dashes. And gangplank is way more annoying to play against since he's not even playing the same game as you; he's just farming up and will bust a cap in your ass repeatedly while doing it. And he's winning so long as he is. Can even run about as fast as riven dashes when he shoots a barrel.

Looks like she actually has quite a few losing matchups that are melee champs. It's almost like she's incredibly weak against champions that have the necesarry mobility to avoid her tentacles or can just out-sustain her. So yeah, she has much more counterplay than you let on.

It's so funny watching people smugly slip on banana peels. Guess what? Those aren't lane counters. Those are whether or not you win THE GAME against those champs. Malphite's the kind of champion that just loses pretty much every god damn matchup in lane, but turns that shit around for teamfights later. He does, however, not fucking win against a jayce in lane despite his 60% winrate. He gets poked up and just soaks XP til he's useful. Or, he could, as has been repeated ad nauseum by now, run down the lane and feed and wonder what's going wrong. Why he counters jayce is because Jayce primarily wants to siege and keep his distance later. Malphite has an ult about the range if his poke that throws him up in the air and lets the team throw themselves on jayce. Doesn't get to poke much then. Now that's just the factor of one champion's effect on team dynamic over time. I'm not about to explain how the meta and popular team comps affect those charts. If you want to keep thinking it's dodging tentacles is what gives you an edge over illaoi, then go ahead.