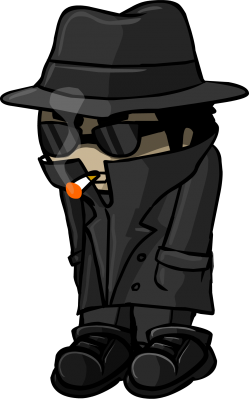 This one’s name speaks for itself. Blackmailer’s main duty in Town of Salem is to kill everyone who does not kneel to the Mafia. A supporting role, it is based on blackmailing people which can’t speak the next day and communicating with other Mafia members at night. Joins Mafia once other gang members are dead.

I disagree with the above claim that faking blackmailed is a strategy with few benefits, especially in Ranked Practice when players may not keep track of the Mafia so well. For instance, I had this one game as a Serial Killer when it saved my life and netted me a win: It was down to me, a Blackmailer-turned-Mafioso, and a Townie (that turned out to be Retri.) For some reason, no one had realized I was the SK, but I was the only one without a role claim, so I got voted up. I had been relatively quiet before, and any role claim I made was going to fall flat, so I decided on a last-ditch strategy I was sure wouldn't work: faking blackmailed! Retri innoed for some reason, I was pardoned, and that night I killed the Mafioso and won. Still not sure why the Retri thought that I could've been BMed with one Mafia left, but hey... if you're ever in a game chock full o' noobs, try it! Surprisingly effective. I give this strategy 3.5 out of 5 stars (I recognize that this is an outlier situation.)

I love Blackmailer(s), they help the Mafia"s team by shut down (the mouth) some of the Town Investigative roles trying to bust Mafia members.They can also hear whispers like Spy,too! (But Spy no longer hear whisper). Conclsion: Blackmailers should be Mafia Deception, Not Mafia Support.

"From 2.0.0.0.6537, it's impossible for Blackmailers to claim Spy, as Spy can't hear private messages anymore" I mean, they can still claim Spy... nobody has to know you can read whispers.

Only Mafia and Coven can claim Spy.

Blackmailer is my favorite role AND my favorite troll! Here's a little tale of one of my games with said favorite role/troll. I was playing Ranked Practice so I could use my the scrolls for my favorite roles. There were 4 Mafia, because of the any slot. Town did pretty bad. There was an Arsonist who did surprisingly well. He incinerated most of Town and killed my Framer. After that, there was 1 Town, 3 Mafia, 1 strange Witch who kept calling my GF the Arsonist, and then there was, of course, the Arsonist. It was purely a guessing game at that point, deciding who to lynch... but nobody was voted up. Because my strategy was to NEVER blackmail unless I needed to for whatever reason. Or if I wanted to troll. That too. So I did nothing that night. Common strategy, of course. It is now morning. The Vigilante killed the Witch. I believe that the Mafioso hit the Arsonist but thought the Arsonist was transported... I don't know why I believed that. It was a 50/50 chance to lynch Arsonist or Vigilante. Of course, we lynched Vigilante. TARNATION! We had to hope that the Arsonist didn't have us doused, because we all knew he had no choice but to incinerate tonight. I blackmailed the Arsonist because it didn't matter at this point. Plus I like trolling. But then we woke up with the Godfather's burnt corpse on the ground. The Arsonist incinerated the Godfather. The Mafioso and I are still alive to lynch him! So we did just that, of course... After the discussion phase... So I decided to have a little fun with our blackmailed pyromaniac friend. I said things such as "ROLE NOW ( ͡° ͜ʖ ͡°)" and "Role or die! ( ͡° ͜ʖ ͡°)"... pretty much different variations of that. I just taunted him about the fact that he couldn't talk. He didn't leave the game, but I think he ragequit because he didn't even say "I am blackmailed." when he was up for trial. It was a fun match either way, and I was glad I got to play as my favorite role yet again.

That feeling when (in Ranked) you see N1 "John Hathorne has decided to blackmail Ann Hibbs tonight." and you instantly know the Blackmailer is a total noob. As a Blackmailer you should almost never blackmail. Every time you blackmail someone: - you confirm them as non-Mafia, not only to Spies but also to the rest of the Town when he gives signals about being blackmailed - you risk being killed by the Veteran, the Werewolf or caught red-handed by a Lookout - you reveal what Random Mafia is to the Town thus claiming Spy is very risky - you make everyone very careful with whispers Not blackmailing, claiming Spy, harvesting info from whispers and - when there is no real Spy - giving false info about the Mafia visits is the best strategy. For example when the Mafioso (or even yourself) is busted by a Sheriff you can just say that he was visited by the Mafia so he is framed.

Just had the best/worst game of bmer yesterday (in Ranked Practice), that game was so dumb, here's the story The first couple of Days and Nights were pretty bad for mafia, attack a jester who was jailed, jailor executing survivor, jailor jailing mafia so they can't attack, the WW and every member of the mafia got pick off, it was me and the jester vs the entire town, I thought I lose for sure, but something else happens. During those day, I Learn a lots of infos, the jester who was healed claim sheriff, I knew he was jester base on the whisper, escort and consort rb'ing people cover up for mafia getting jailed so they can't kill, I learn who is the sheriff and lookout through whisper, after that, I got promoted to mafioso after the consort died, there was only me, the jester, the revived sheriff, an escort, a confirm ret, a vetaran, a lookout and a BG. This seem hopeless, I didn't bother to win, so most of the post game I just go afk and look at other tabs while occasionally look back in the game and tried to survived, the setup is done, now for the real show, here's what happens: I message the jester knowing there was no spy and tell him that I want to give him the win since it's hopeless for me, the jester only did 1 thing: not voting anyone until someone lynch him, night pass, I kill the sheriff, Someone ask the lookout for his role, he said it but got suspicious because the jester also claim TI, so unless he was RT or any he was unlikely to be lookout, the will wasn't convincing either, people vote on him, but I didn't, I have to make sure he is alive so that someone could take the blame for me, I also was talking in chat about how town should hang the jester to at least give him a win without revealing as maf. I killed the escort, everybody got over the lookout claim and most of the people think that the sheriff claim was false and he is jester, they ask me and the BG for role, the BG claim his role and I claim NOTHING. No one believe him since BG was already dead, everybody vote him up and I did the same thing as yesterday, not vote him so he could take the blame for me and voting the jester instead, the jester didn't vote because phreviously said reason and the RET of all people didn't vote the BG cause he still think that the lookout is mafia, the vote was spread give me enough time to make another kill, I killed the vet and same thing as yesterday, lookout vote the BG, the BG vote me, the ret vote the lookout, jester vote no one and I vote the jester, the ret left out of pure frustration, I kill the BG so he won't kill me, final day and the lookout know it was me, I suggest again that we vote the jester giving him the win and to decide town or mafia will win, look out refuse at first but both of us vote the jester soon after, both of us vote guilty to make the jester decide, who win, next night I kill the lookout and the jester kill me, it was a win for the jester. Now, the reason why I think this was the best/worst TOS bmer game I have is that while it's fun tricking other people and lasted for so long, it was also frustrating knowing how STUPID that town was, like seriously, if you remember correctly I claimed NOTHING, yet they decide to vote the BG instead of me, not only that, there was another thing I didn't mention: my deathnote. Town clearly didn't read my note because if they did they prob would've caught me 3 night earlier, the note I make tell town to do me a favour and at least have the jester win, I was sure I couldn't have won so I write that in the note, In the PUBLIC CHAT I was clearly suggesting that we should hang the jester and I was the only one that did that, I was the only one who even voted the jester, yet town didn't even notice. This is the reason why I voted guilty on the jester, I could have easily unvoted at the last second if I wanted, but I didn't because I know I didn't deserve that win, town didn't deserve that win, the jester did, I gave jester the win because he deserve it after all the sh** he been through

How to claim spy as bm: If there is no spy in your game, write your will as if you were a spy, putting mafia visits and certain things your fellow mafia had said in chat. But make sure to put mafia members in your will as being visited. If you don't, then you risk your mafia getting exposed. Make sure not to blackmail if you are using this strategy. Make sure you are not the last living member of the mafia, as you are doomed when they attempt to spytest you again to check. So when your teammate gets suspected, simply expose yourself to deflect attention away from them. If there is a spy, simply dont claim spy and blackmail random people who arent spies. Make sure not to blackmail more than 4 people as if you do, then it becomes easier for spies to narrow down the mafia through visits alone. By blackmailing random people (especially people who suspect the spies), it casts real spies under suspicion when they do try to claim spy.

It is my beleif that when a role is blackmiled, they should not be able to vote. This way, you cannot show you were blackmailed, and the blackmailer can stay undercover.I think a revealed mayor should then be immune to bmailing then though as kinda a balance to that.

Yeah, buff spy to completly prove spy of being inno with no drawback, and have the jailor have the ability to DETECT A MAFIA MEMBER, GREAT IDEA (sarcasm) But altho the ability for Bmer to hear jailor and his target is not bad

This happened once: I was in a game as a exe turned jester and a blackmailer decided to play the "Why are you not talking" plot, fotunately people fell for it and I got hung. So as my roles night kill I chose the person who put me up sort as a jokes on you sort of thing. It is still funny when the person you kill to try to win comes back and kills you.