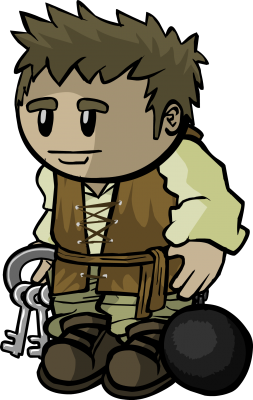 A unique role in Town of Salem game which takes the side of the good guys, with a little twist. The goal if Jailor is to capture and lynch all of the criminals. He is able to incarcerate people during the day, strike at night, ignore the immunity and block the role.

Sometimes I wish there was something somehow implemented so that you'd have to be a certain level of intelligence/maturity to be a jailor. Let me explain. So, one time I was an investigator and my name just happened to be breast cancer (someone said to make a types of cancer theme for names and I didn't see any problems with it so I just went with it (furthermore, is that breaking the rules? I dunno.)) Sadly, someone did take offense to my name and they happened to me a jailor. I ended up being even MORE unlucky, as this jailor was immature to no end, because when I stated my role, they IGNORED what I said, pretending that I didn't say anything. They proceeded to count down and execute me regardless. NOT ONLY DID THAT HAPPEN, but the day after I died, this baboon also died. They had written in their will that I was a confirmed mafia member (again, I was already dead.) I was obviously very angry at the irationability of this jailor and asked them why I was executed even though I stated my role. This child had the nerve, THE NERVE, to say that I told them I was a godfather and threatened to kill them. Just a little reminder, I was an investigator. While I was arguing with this unfathomably stupid jailor, the living townies were rejoicing in my death, saying that they beat cancer (actually, this was really funny now that I think about it, but I was in a bad mood so this was just icing on the cake.) The jailor continued to insult me and lie about the events (furthermore, I had screenshots againt this kid, but I was too late and couldn't send a link to the photo in the chat to prove I'm not a totaly idiot.) TL;DR blah blah stupid jailor killed me because of my name I can't post the screenshot for whatever reason, so just take me word for what happened.

if a jailor is killed and brought back by retrib, do they still have executions? or no?

I just added the Suspicious Claims section to this page. Is there anything I've missed or any wrong information?

When you get that one Classic game where the Jailor manages to execute all three Mafia without fail. ...and the LO's nice enough to take the hit to let you, the Exe-turned-Jester, get lynched and win. Gotta love this game!

how do you open up the 'execute reason note'?

No idea. I'm not sure it has even actually been implemented yet, I think BMG might still be working on it.

Can someone explain to me why people claim Jester to Jailors? I don't get it.

Some Jesters believe that some Jailors will allow them to live because a) they don't want to waste an execution on a Neutral and b) the Jester being hung by Mafia/Coven might make one of the aforesaid scum get haunted. In my opinion though, it's not worth it because a) Jailor never gets to use all 3 executions usually anyway and b) the chances the Town will hang the Jester are much higher.

well the jailor can be a good guy, letting the jester get hanged or try to get hanged i personally never execute jesters, exes, and survs because i know it hurts when it happens

Version 2.0 removed death notes for all town roles. The devs might re-add Jailor death notes after a swarm of comments displaying concern.

It would make sense if Jailor had a note imo. If they executed a townie then the chat would rage at them, if the townie didn't claim or something then it's not the Jailor's fault. They need a way to tell people that. And lorewise, a death note for the Jailor is kinda like "You have been found guilty of ______ and sentenced to death".

But let's be honest, when do townies actually read Jailor's note before calling him an idiot?

I remember in one of the games, i was jailor, and it so happened that for almost 3-5 nights straight, i kept jailing the mafia's targets, which messed them up. then i jailed wrongly, one person dien via mafia that night. continued jailing mafia's target's by accident. i also jailed the God Father and Consort but didn't excute them because consort claimed escort and God Father claimed Vig or Vet i think, and i got paranoid and didn't kill them, but i think town won due to the fact there was the mafia stuck not being able to kill anyone because i kept jailing them, until they killed me, don't rememeber what happened after that. It was a fun game, although i was a horrible jailor

I was the jailor in a ranked practice. N1: jailed A who claimed to be jester N2: jailed B who claimed to be survivor During the daytime, A accused B for being mafia in a very confident way. The town lyunched B and turned out B was GF. This was a good result but it made me wonder : How could A (jester) know that B was mafia. Only if A attacked B who was in my jail and found B being immune. There was no way that A was a jester. Therefore, I invited A into my jail again and had a talk. A confessed that he was a vampire. And he could find out mafia for me like what he did last time. I refused it and executed him. I always think that it is too hard to win with vampire. Note: The life of A: N1:jailed, N2:bit a GF, N3:got executed. ->he didn't bite anyone. Day4: We lyunched the SK. There were 2 transporters and were making a mess. So I was on my own. As I had no clue, I just invited a random quiet person into my cell. Night4: I pressed the execution button without saying a word. And the prisonor said: WOW nice, how do you know? ... Well actually I didn't, he just busted himself. If he claimed a role to me, I may spare him already. So never give up defending yourself so soon even you think you see a "confindent" jailor like me. I always think that townies will defend themselves if they are clean. Day5: The prisonor was GF. so only 1 mafioso left. I , again, jailed a random quiet person. Night5: He claimed to be escort. I doubted but I spared him, because he would be guilty if there was no death tmr. Day6: No death. It always feels good to be jailor--you will never get lyunched. Only me and the "escort" were suspicious to town for being too quiet. I confessed that I was jailor and the "escort" got immediately lyunched. The moment when you confessed to be a jailor always feels good because no one will doubt that. No one will dare to lie as a jailor. Town won.

I was a jailor in classic. Near the end of the game there was only me, the gf, and the sk. somehow they didnt lynch me. i decided to jail the gf. I executed him. The sk didn't kill me. I then jailed him and proceeded to execute him. The dead townies were screaming "epic win!!!!"

Is it just me or does the jailor have the most badass story out of all the roles? It's a really cool scenario if you imagine it in the head.

I once had a game where night 1 a doctor was jailed and claimed doctor in jail, jailor was stabbed by sk (I was sheriff this was ranked) Jailor put doc claim in will, and doctor was executioner target. Executioner got a real easy win didn't he?

I was jailed in a ranked game when I was a Doctor. I told the jailor that, he didn't exe me. Next morning, jailor is stabbed by the sk. The town reads the will that says I was Doc/Sk and they lynch me :| so unlucky....

Awesome Jailor game but I can't remember the whole thing And the claims are what the people I jailed claimed N1:didn't jail (I didn't know how before n3 N3:claimed mafioso, I executed,was mafioso N4:claimed doc, didn't execute N5:claimed exe, I executed, was framer N6:jail sharif to protect him N7im bitten by vamp, the sharif was a vamp D8:we linch someone D9:we linch someone else N9:we bite last person, vamp win (my first vamp win)

I was jailor in an All/Any game. I jailed someone named "Eminem" on N1, and said nothing. They said nothing in return. I jailed them again N2, to see if they would claim anything. Nothing. I clicked the execute button at around 20 seconds left. Yet again, nothing. I went through with the execution, and even put in the DN that they claimed nothing. "Eminem" was Mayor. The Town turned on the Jailor, but they had no idea who it was, since it was only D3. Was it right for me to of executed the Mayor? Note: They were not AFK. They were voting and speaking in chat during D2, so there is no reason why he shouldn't of claimed a role.

As someone who's favorite role is jailor, it would have completely not been your fault for executing him if you had asked something. Often, players need a prompt. I know that immediately claiming a role when jailed sounds like something that all players should just do instinctively, but in cases like that, before you executed him you should have asked him his role just in case. Then again, the mayor probably should have revealed or known better and told you his role without needing a prompt.