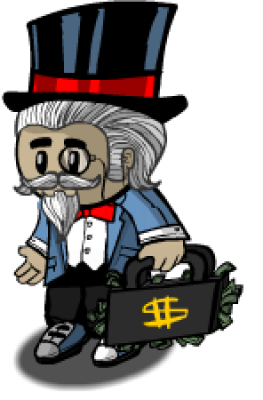 The proud leader of Town of Salem’s good guys. His main ability is to expose himself as a mayor and therefore make his vote equal 3. Mayor then loses the chance to be healed by Doctor but still can be protected by Jailor or Bodyguard. Main goal is to kill all the bad guys.

So, someone claimed mayor when I jailed him, and I told him to reveal the next day or be executed. He did it and after he died. He got salty and reported me for gamethrowing. Seriously, there might be a possibilty for a bodyguard, and he called the "Jailor" a bitch. End of story, just happy like the Beauty and the Beast

I remember someone named "Yolo" has instantly revealed himself as soon the game started LMAO-- He died on the next day though.

Yiiikes. Sorry you had to experience that game. It seems like Mayor is the one role that people are consistently trash on.

best strrat ever: revealmayo on 1st day and get lookout to watch u every nite then if mayo gets attacked linch em

what if more than 1 person visits or lookout dies

I was in an odd mood and I was playing Any All, so I named myself DumbRole and hoped for exactly that, a dumb role. I got Mayor. I got a laugh from that. I had asked for a dumb role and I couldn't think of a role more perfect than mayor in any all.. So I just sat and waited and listened to chat. On night 1, the jester died to maf and SK and the blackmailer suicided. The spy died as well but I don't remember why. By day 5, the janitor and the sk were dead along with the escort, invest, and someone who was cleaned. The amne had become the new blackmailer. There were seven people left. In chat, this guy starts saying things like, "mafia we got maj." I was so confused. Maj? Maj? Someone was voted up and I was still trying to sort out what "maj" was. The same guy as before said, "mafia, vote guilty" and it hit me: majority. The mafia is confident because they THINK they have majority. I type quickly in chat: "Town vote innocent." And then I revealed. The person is voted down by ME alone. With a little help we voted up the vocal one, who proceded to say, "mafia vote innocent" to which he got the reply, "But the mayor." He was hung and turned out to be forger. I was certain that I would die that night. Afterall, there had to be three more mafia alive for there to have been a majority pre-reveal. For some reason, I lived and was merely blackmailed. The amne turned blackmailer was dead by vampire, who I had completely forgot was in the game (they had killed the janitor). The GF also died for some reason... Unable to speak, I voted with the town and vampire to get the last mafia. That night, I was bitten and won with Vampire when we hung the doc. Mafia was so salty. They would have had it... If I wasn't the mayor. XD

I find it unfortunate that to most players, Mayors (as well as Jailors, Vigilantes and Veterans) are supposed to be the know-all of town and the lyncher of every single evil. Good luck being forced to reveal D2 and then having a boat load of TI and TP claims, and having people call you a dumbass left and right because you legitimately have no idea who to lynch since most claims seem to have no information whatsoever in their wills.

I remember this one game where I was Mayor and town was doing terrible but all the bad role were being killed off. The last night of the game, the last mafioso decided to kill the other guy (don't remember his role, I think he was sheriff or smth.) Mafioso says "GG, it's sad to see you go.." right before voting, I revealed I was Mayor, guy freaks out. Town wins. GG indeed. ;)

Today I played as Mayor. I didn't reveal until there was only me, Vig, and SK. I wanted the achievement for not revealing, but I had to in order to kill SK. We won in the end, but the strange thing is that both SK and Vig said I was immune to their attacks. And I haven't even got the "you've been attacked but you were immune" text. What happened?

Was there a Trans or Witch in the game? If so, they hit themselves (or another immune). Other than that, I can't think of anything other than possibly a bug. Or them lying.

I was jailor right? I always do this it's hilarious! The mayor reveals so I jail him to protect him But here is the fun part}:) I pressed execute and they are always like WHAT THE HECK YOU IDIOT IM PROVEN MAYOR FINE EXECUTE ME DUMMY And I'm like: lol it's just a prank And I don't execute. Btw pressing that button gets people talking faster then you think.