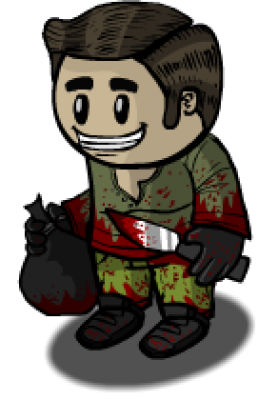 This guy has to outlive everyone in Town of Salem game to win. He does not side with the bad or good guys and only kills. Serial killer can murder anyone in the night and has the immunity for the same period of time, therefore he cannot die when the sun hides behind the horizon.

sk only bloods the will for escort, consort, and jailor not pirate because pirate is the only good NC role

My favorite moments are when I'm revealed d2 as SK bc LO or Spy or something, but I end up winning anyway.

This was probably my best game as serial killer... (I was Pocket, named after the Jester in Shakespeares "King Lear" since I had a Jester skin.)

Honestly I like this role probably the best. I dunno, but it's been pretty easy for me (unlike something as the godfather, which in my book is the worst role because everything goes wrong when I get it).

One time in classic, I won a game as SK because the Investigator who knew for a fact who I was didn't keep his cool. He got really angry at Town when they didn't immediatly lynch me, and I managed to get him on the stand and lynch him. I went on to win the game. Moral of the story, keep your cool in order to win.

The only reason I won is because it was me (sk), gf, and witch and the witch decided to side with me and lynch the gf...

Once, I won a game as the SK in Rainbow because when it was down to two people, me and the jailor, who had not used all his executions, he asked for a rolecall, I said I was the doctor (I was just messing with him) and believed me! This was stupid for several reasosns, one, Town would have won then, and two, the any was taken! The any was a janitor by the way. That night, he didn't jail me because I was the supposed doctor so I killed him and won.

This is actually my least favorite role in classic because you are literally the only SK and you are forced to kill the Mafia AND Town, but I actually won one time because of how dumb the town and mafia is. I keep killing people with certain names I can make some funny death notes about. One person is named cupcake and I put my deathnote: "I like you better in Red Velvet." Another person is named Cake, and I told them they taste like s***. Another person is named lmao xdxdxdxd, and I told them their name sucks. The town keeps accusing me for being SK, and I do admit being SK because of the fact that I dislike this role. But the town is so dumb that they didn't lynch me because they suspect me for being Jester or Executioner(even though they died already), not even the mafia would kill me at night. Probably because I was immune. I thought I was winning so I keep carrying on. When I killed the final town role, with me and maf alone, I won. Lesson: ALWAYS CHECK THE GRAVEYARD AND LIST OF ROLES.

I honestly dont know why that last part "About the Serial Killers" is included in this as this is a game with serial killers in it. This is not the Wikipedia page for Serial Killer.

*plays all any and gets survivor, gets shot by vig night one* Me: Okay then, we have a witch, I'll just sit this one out for a bit and try to beat this level on Advance wars dual strike. *some time later, game ends and I look up to see i'm in the after party.* *looks at role list and sees two Serial killers, 2 arsonists and two witches (and also 8 townies)* Me: Well, I wonder who won....

Finally I'm able to play as Serial Killer nicely after a lot of trials and errors plus many Scrolls wasted for nothing XD On one game, I was Serial Killer (Ranked Practice mode). I killed someone to found out the next day that there was also another Serial Killer kills. I just laughed at that and the rest of the night, other Serial Killer also killed people like I did. I prepared fake will as a Doctor which kind of useless because no one ever suspected me. The game ended on Day 5/6 because other Townies/Non immune Mafia already killed by me and other Serial Killer. A Spy also got killed by Vigilante and that was a good opportunity for us. Down to me, the other Serial Killer, and Godfather. We lynched Godfather and Serial Killer won. Got achievement "Psychopathic Pact" too o3o Today I also got Serial Killer thanks to Scrolls XD I just simply killed someone each night, on Day 2, a Bodyguard died protecting someone from Arsonist. I kinda got panic as claiming Doctor would be hard, but I still prepared a fake will anyway. On Night 3, I was jailed. Oh god o_o I claimed Doctor to Jailor, he trusted me as I gave him my fake will. Night ended, I attacked the Jailor, but as his death was announced, he didn't put my name on his will! I was so lucky! XD And to made it worse for Town, no Retributionist at all! Also there was someone who claimed Witch and she told Town that she would help them, I just told her that "A Witch helping Town is gamethrowing" but most people brushed it off as they considered her as a Jester. Silently without I realised, the Witch helped me a lot until she whispered to me "Are you Serial Killer?" with me saying "Yes". Luckily there are no Spy, so both of us were safe. Until finally, the Witch and I lynched the Godfather and both of us won. I thanked her for make me win and I said that "If you didn't helped me, I wouldn't have won." Needless to say, I am so happy!

I hate being SK, I can't team up with anyone and don't know what to do. I know this is probably the worst stragety, but it worked this one time. I appeared afk the whole game, but killed at night. the first nights/days, important townie roles die to me and mafia, like investigator and jailor, and GF and random mafia get lynched. I write fake sheriff and escort wills in case, but I didn't talk or vote the whole game. I kill escort my chance, and town lynches escort's original target. Then it gets narrowed down to a survivor, 2 townies, and mafia member. I get put on the stand. I wait a little bit, then was like "oh sorry, what's happening? I was afk, I hate being medium :(" The town/maf voted inno. Don't know if the rest of them believed me, but one accused me of being jester? Like wtf? Witch was lying in the graveyard. The mafioso kills the townie, and I kill the mafioso, and win. Pls give me better advice, I never win as NK.

I don't know if this is gamethrowing or not, but this is my style of SK. I also consider it being a high risk, high reward, depending on the circumstances. I play as SK, but I side with the Town by not killing anyone except the Mafia. (This does have risks, as a Jailor will die N1 and an Escort that roleblocks u also will die). I reveal Day 1 or Day 2 to everyone that I am the SK but I promise them that I will only kill the bad guys, aka the Mafia and that all townies will be spared. (This is the most dangerous part, many people don't trust SKs, but if they do allow you to live, follow your plan and don't kill unless the town requests someone to die). Using this style of gameplay has actually brought me a few SK victories... I even tried this in Ranked Mode. Despite getting a few votes, within a few days the town had enough trust in me to let me live. Eventually, it came down to just GF, SK (me), and a Lookout (I was able to eliminated the Mafioso). Because I had more credit than the GF, we got the GF lynched. At this point, I had a choice: I could either 1. Kill the Lookout and win, or 2. Allow the game to draw. I initially planned to draw (because I felt so bad for the town having suffered so much to the Mafia. When the Lookout threatened to leave the game (so that I could win), I instead made the ultimate sacrifice and left the game myself. I later found out that the entire town was actually rooting for me...weird...lol). I find that not killing the Town and attempting to kill the Mafia is much better than just killing someone each night, but I think this might be gamethrowing...is it?

So long as you do this with intent to win, it is not gamethrowing. However, if it is a 1 v 1 against a Lookout, not killing them could be considered gamethrowing.

Weird, but thanks for letting me know. Cause I did sacrifice my win for the sake of the Town. Now I know that I have to kill to avoid being called gamethrowing.......

serial killer is so fun, you have high defence and can easily claim doc. when working together with more serial killers, it is even better!