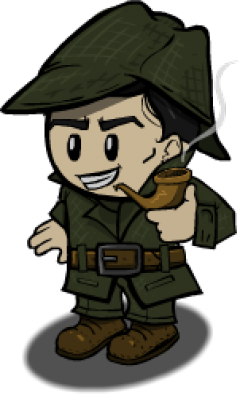 Another Mafia supporting character in Town of Salem. Play while a Consigliere circles around gathering the information for the Mafia and killing everybody who does not join the ranks. Consigliere always sees the exact target and what it is doing at the moment, whereas the Investigator is given 3 options to choose.

I really wouldn't recommend claiming invest as consig; a good spy will be able to see through the claim even if you change around the results or the people in the results (they'll be able to know from visit patterns that there's a consig and so invest claims will be suspicious). If you're going to claim invest as consig, I would recommend at least helping out evils (giving favorable results to neutrals/maf) and pushing mislynches when possible. Lookout is a better claim most times though, as it's far less predictable and, especially if you find something like escort/trans/TP, you can guess based on people's claims who they visited and "confirm" yourself (at the expense of confirming a town, but it's worth it sometimes).

Me as Consig in an All-Any Game Night One: Sheriff and Vamp Die. I invest and find jailor Day One: No one gets lynched Night Two: We kill jailor. I find jester Day Two: Nothing interesting. Maf killed someone. Night Three: I find Witch, convincing the maf that we'll vote the jester up and have them lynch someone from the town. Day Three: Nothing interesting. Just some kills from the maf. (i whisper jester and they're on board with the plan) Night Four: I invest someone (Controlled and find survivor instead) Day four: I tell all the people i find, as well as the maf to lynch kate. The person I whisper, thinking its survivor because i got tunnel vision, is Mayor, who reveals and helps lynch (I WHISPERED HIM TELLING HIM "Lynch Jester. If you do, the maf will let you live." I REVEALED MYSELF AS MAFIA AND HE WENT WITH IT ANYWAYS!) Jester is understandably lynched with only the mayor and the witch as the targets Night Five: We do -nothing- as jester has already agreed to kill the mayor, and we can vote the mayor up if they kill witch. Day Five. Witch, 4 maf (all of us alive), and survivor are alive. 7 man win thanks to me manipulating the whole town and maf. I rallied the mafia -and- neutral roles together to just -CRUSH- the town.

I hope the Administrator could look into this for me. I just posted a photo in "Investigator" about the wrong investigate results. I also just experienced this when I was Consigliere

I think your target was just transported.

I think the results for Godfather is a bit off... Considering there is 1 Mafia in a game and they're the only leader, isn't it supposed to be.. Your target is the leader of the Mafia. They must be the Godfather.

I think i remember someone posting this but in my opinion a good claim for consig is lookout. Since you can determine exact roles, then it becomes easier to predict who would visit that target. If the target is someone asking for tp for example, if you found a doctor, you can say that they visited that person. When it becomes revealed that a random mafia role in ranked is consig, then your lookout claim wont be so suspicious if they suspect you of being consig.

I have a problem that has yet to be addresses in this wiki. As a consig I found an arsonist Night 1. turns out he was doused N1, he was a Spy, not an arsonist. This wiki does not discuss any results that occur on the same night. After 2000+ games, I was unaware that arso changes people's visible roles on the very same night he douses, and not one night later. Same goes for Vampire Hunter - if he checks someone that has been bit on that very same night, will he kill the fresh vampire or not?

No, the VH will kill the attacking vamp and save the person from getting bit.

My new strategy for Consig (not sure if others use it, but I like it): If I find a person and it comes up as (e.g) Arso, obviously I want it down. I thus write down Arso/BG/GF (arso being the correct role unless doused). I do the same if it comes up as BG (if that person counter claims, I simply say he might have been doused. People panic and I laugh.) If it's a role that's not a direct threat (e.g Lookout)? Amne/Lookout/Forger (Amnes can join town if I'm unlucky, so I kind of want them out of the way) "But what if it's a Doc then?" SK/Doc/Disg (you'd be surprised how often I got Doctors lynched like this!) Medium or Ret? I write it down as Vamp/Jest/Framer (if there's confirmed it's a vamp game). Otherwise, it's Jest/Vamp/Framer. People *hate* me when I do that... (Note: I do tell the Mafia what the actual role was as long as there's no Spy). Surv/VH/Witch is listed with Surv being the 'correct' role (unless it's a confirmed Vamp game; I then write it down as Witch). Spy/Jailor/BM is a bit more tricky: I generally write it down as Spy as that person will fail a Spy check and as such people might get suspicious. Or, I write that person down as Witch (if someone else claims that one showed up as something else, I generally say s/he might have been trans'd - helps if you have a BM'er so no one can counter-claim this). Escort/Consort/Transporter: I write any of them down as Consort/Escort/Transport (unless it's a confirmed townie e.g was res'd). Got a few people lynched like that... For Vig/Vet/Mafioso: I write it down as Mafioso/Vig/Vet (regardless of what they showed up as). People now suspect that person (best case) or realize I'm lying (worst case).

I think something that should be considered is the creation of a new role. Specifically a Bodyguard for the Mafia. If it means having to scrap a mafia role then scrap framer. Overall though the mafia does need buffs and giving them their own BG or even their own Doctor, could significantly help.

I have a question about the 'Uh Oh' achievement (Find a Vet as Consig). Will that achievement will proc if I die when visiting the Vet, or do I need to visit the Vet while s/he is not on Alert?

I think you just need to find the Veteran whether or not they are on alert.

As a Consigliere I visited a Veteran and got killed by him, yet I still got this achievement.

The message when a consig finds a disg should be changed since the disg disguise roles it should be like "Your target disguise as other people's roles,they must be a disguiser.

The consigliere is eagle eyed investigator, Just a simple check on a person confirms his theory, He never had the privelege of going to school as his family was extremely poor, He, however; tutoring from the town's investigator, To investigator's surprise,The boy was gifted in this sorts of stuff, Investigator teached him alot of things, However consigliere was always a step ahead of him, In one frightful night the investigator was killed by a serial killer, The consigliere shed tears, While knowing clear as day who's the serial killer is, In his engragement; He searched people's homes, And pinpointed the mafioso, He told the mafioso at day;That he knows the serial killer, The serial killer was hanged by the town, As they would never rely on a kid to find the serial killer, Mafia hired the kid, Things happened, And consigliere's family passed way; when was consigliere's at the age of 27, Consigliere was able to provide for his family to be borderline wealthy, He travelled to town of salem, Working as an eagle-eyed investigator, He also, Gave some information in exchange for cash, That ultimately is what got him fired, He was outraged, in his outrage, He obtained the identity of the mafia members; one thing seemed odd, He visited the godfather at night, He waked the godfather up, The godfathe instantaneously pulled out his gun, The godfather said, "You have one minute to tell me who you are!" The consig chuckled, And said "I'm the kid that kid...From an old town, You payed me to deduce who're who, It seems like you became a godfather; I want to become...a mafia member"The godfather accepted, And the kid that once was an investigator, Is now not but a memory.