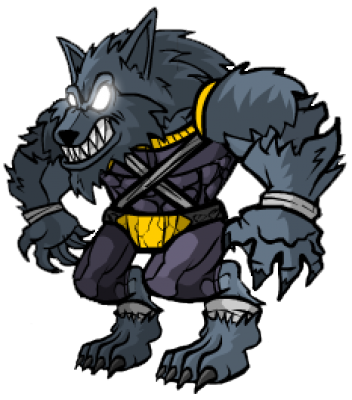 Bloodthirsty monster that attacks at Full Moon in Town of Salem. Roles that are quite limited and often automated can be hard to master, as can be with this one. Werewolf can be controlled by Witch or Coven Leader to deal Powerful attacks, strike on his own or attack Jailor if not executed in time.

It doesn't say what happens if a witch controls a werewolf not on a full moon... so what does? I tried it and nothing happened but I want others' views please.

If you get jailed as a WW he will still be able to execute you...

Correct. If the Jailor doesn't execute you, then you will kill him.

Apparently If WW is last with GF, WW wins. Didnt know that just leaving it so you guys get to know :D I don't think its posted here in the page.

WW in Ranked: D2 I decided to play Exe and accused a random person of being Mafia. He was voted up but innoed, even though the actual Exe sided with me and there was a counter-claim to his Bodyguard claim. After many days and nights of constant accusations and caps locks, Jailor finally decided to execute the BG claim N4, which was also when I decided to maul said BG claim. Aaaand he was Godfather. OTL

This happened in a game with werewolf I was sheriff. N1.i found a mafia member D2.this person maf! Such exe then the guy says he was framed N3. I believe him so check other people. Most of the game we had no idea there was werewolf but when he killed 3 people including 2 mafia members here is his death note A picture of the annoying dog(look up) saying THIS IS MY TRUE FORM!!AUU AUU AUUUUUUUUU!!!!!!

Also, will the Lookout die to the Werewolf?

lookout will not see werewolf visit escort and lookout will not die to werewolf. but if lookout watched ww, he will see escort visit ww and then the lookout will die. explanation- escort roleblocks ww, making ww stay home. when ww stays home he attacks anyone and everyone who visits him. lookout was watching escort so technically he didnt visit ww so he shouldnt die. if lookout watched ww when escort rb'ed, then lookout visited ww when ww stays home and attacks everyone that visits him, so both escort and lookout i just realized ww staying home is basically vet with unlimited alerts but only on even nights

what I did (and won with in Ranked) was not staying home or going out. i didn't select anything. i was even jailed n1, claimed LO, and jailor believed me. everyone was like 'wtf' at the end >:D

I felt bad for a WW I met in All Any (I was Exe). N1, nothing happens. D2, WW says he was attacked but healed. A person claims Vig and says he shot him. Obviously that guy's lynched... (He was Mafioso, as you might have guessed). N2, WW kills 3 people (Invest/Sheriff/Escort - Escort/Invest both visited Sheriff's house). Mafia attacks me but I'm immune. D3, Mafia calls me out as immune. I explain I'm Exe and that if there's a Witch or Consig, they're free to check me. People doubt me and ask for my target. I say who it is (it was a Doc). No lynch happens. N3, nothing happens again. D4, no lynch and somehow no deaths. I think the GF attacked WW and the SK was AFK. N4, WW kills GF and SK (SK attacked the GF). Mafia attacks me. Again. D5, it's down to me, the WW, my target (Doc) and an unknown. I ask for my target to get lynched. Sure, why not? We lynch him and I thank them. N5, it's not WW night so I don't care much. D6, I ask who the WW and is and what the unknown is. No reply. I shrug. N6, WW attempts to attack the unknown... Only to find out it was a Vet who used his last alert. WW was sad (as it'd have been his first WW win and everyone else in the town left anyway except for that Vet)

I had a really randnight as ww, I visited a obvious exe and I attacked 6 people. It tuns out that a sk, a mafioso visited the target and that a transporter had swapped me and the exe and that a witch had controlled me (not realising I was transed) to visit the exe, it was a slaughter