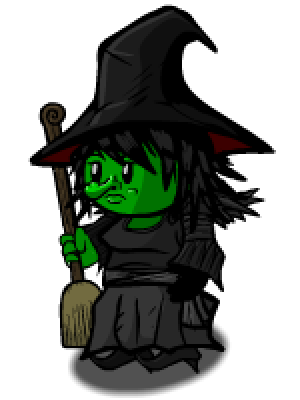 One of the coolest Town of Salem roles, the Witch can control one target each night. Controlled people may perform only one action per night which includes murder and investigation. However, the target will know about the control. Witch is immune to Vampire bite and needs to kill all of the Town to win.

Super confused. Was in game with friend and we were in custom.My friend got shot and i was ret and i resurected him. There were 2 witches (one of them was an any role so we didnt know there were 2), 3 maf and an arso and we killed all the maf, 1 witch and the arso and it was left to about 5 people. When we killed the arso we expected a win but it went into night sequence again and we were super confused. That night my friend tried to shoot someone but the witch made them kill themself insted and when we woke up in the morning he was dead but it said town won even with a witch? HELP????

Witch is my favorite role to play, I constantly purchase Witch scrolls. My biggest pet peeve is when there's 3-4 plays left, and the Mafia decide to lynch the confirmed Witch for no reason at all. I have actually played countless games where the Mafia would've won if they would've left me alive. 1. There were 3 people left, me, a Mafioso, and an unknown Town. Mafia decides to lynch me instead of the Townie. I reported the Mafioso, but not the Townie, since it is in his allignments to kill Witches. Anyways, they lynch me, and the Mafia attacks the last Townie. Can you guess what that last Townie was? A Veteran on alert. Both me and the Mafia would've won if we would've lynched the Veteran instead. 2. There were 4 people left, me, a Vampire, a Mafia, and a Medium. Everyone knew eachother's roles, and I told the Mafia that I would win with them. I told them to lynch the Vampire, then he would kill the Medium during the night. You know what he did instead? He lynched me, along with the Medium and the Vampire. The Mafia, being stupid af, attacks the Medium instead of the Vampire, and the Vampire attackes the Mafia. The makes the Vampires win, and not the Mafia. I just had to rant, since it's such an annoying, useless problem. 6/10 times, the Mafia will turn against me, and lynch me. I was wondering if anyone else had these problems with playing Witch.

if your witch, and find arsonist, and tell the arsonist your witch, the next night you’ll get burned

One time I was Arso and there was a Witch and an SK (this was a custom game) and the witch had agreed to ally with me. I jokingly proposed to her and she said no, and me and the SK lynched her and I won it was hilarious

Just a question-- can witches control someone after they have died? As in, they left the game during morning so their name is still there and can be clicked.

I removed the Part with the spy since the spy can't read whispers anymore. If the Spy gets his ability to read whispers again i will put it in again :P

Why would they touch and nerf the classic witch, even if the coven leader is basically the untouched 1.5 witch? Considering that the coven mode is different? :c They're gonna have a hard time again especially after the "bulletproof vest" thing and being able to die by vamps. Plus they'll be unknowingly forcing "mediums to visit jesters" again.

I agree that there are somethings that make it harder to play the witch now but there are also things that may help you Advanges: The Magical barrier will help you if you get attacked this is very usefull in Vigilantics and Rainbow it also may prove to the town that you are a Survivor cause you survived a attack Disadvanges: it will be harder to find evil roles since the mafia has a lot of none killing roles it will be harder for the Witch to find an usefull townie like Jailor or mayor and the Witch losing bite immunity im not sure why they changed that i guess they want the Witch to die fast

but they are still removing the consigliere ability, no? the forums and this page itself said. or was that the ability that HawaiianPikachu was telling me that they will keep, cuz that's what makes me love the role much more...

Honestly, the 'low priority' part of strategies is not going to work 90% of the time in the early-mid game. In the majority of the games I've played, town will lynch ANYONE who is against town, no matter how minor. I've seen lynches wasted on executioners, jesters (autistic screeching) and the like.

Witch in All Any. Fast forward to d6 (because I have yet to find a Mafia or SK). We lynch a guy (Sheriff). It's down to 4 people: Me, a Mafia Killing (GF), an Escort/Consort (I didn't know which; I did know there was one due to a Doctor claiming RB'd when trying to heal the BG) and an unknown (Vet). I control a person at random to control someone else. Turns out to be a Consort. Oh well. The next day, I find that no one's dead. Consort: did you witch me?? Me: Yes. Consort: i c We lynch the Vet... Who had alerted that very night which would have killed the GF if he had visited. Unintentional possible teammate save is best save.

Honestly, the best way I found to alert evil roles of who you are without the spy finding out is to witch them and then whisper the next morning something like "Interesting." Since they most likely won't claim they're witched, the spy won't know what you're talking about and the evil role, which knows they were witched last night, knows exactly what you think is "Interesting."

I just got Witch, and I'd say despite my loss I did pretty well. First few nights, I was just controlling people to themselves to learn their role. Then I got jailed, and talked my way out of execution by claiming Vampire Hunter. Then I controlled someone who was probably the Vigilante to target someone. At the last minute, I decided to instead make them target the probably-Veteran. I was correct on both. I caused the whole town to be confused about the Veteran's identity, since I didn't change my will when I changed my target.