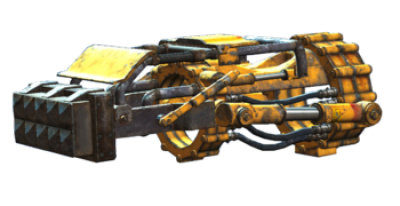 A more bare-bones design than the previous games, the power fists found in the Commonwealth were originally used as pre-War hardware for demolition crews rather than as a weapon. Like the previous version, the power fist uses a pneumatic battering ram to deliver powerful, medium-speed punches to attackers, releasing a puff of steam and sparks with each punch. Its power attack is a heavy underhanded thrust. The penetrating modification adds more ballistic damage and penetrates armor to some degree. The heating coil adds slightly more energy damage than the piercing modification, but it does not penetrate armor.