Cicero from Top Followers In The Elder Scrolls V: Skyrim 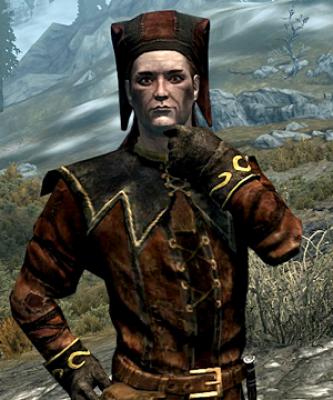 At the first glance, Cicero is an ordinary jester who travels with a coffin. Mad in his beliefs he is one of the loved Skyrim followers because of his loyalty to the Dark Brotherhood. Once you save his life, Cicero can repay you for mercy with everlasting friendship and a sharp knife to protect you.

A Fool of Chance xxxXxxx "Liiistenerrrr! Cicero is cold!" The black and red garbed jester complained as his listener, Xan, and himself continued to tread through the tundra of Dawnstar. The jester rubbed his fore arms and shivered as he slowed his pace of walking. The two were going through the snow on food due to Xan somehow loosing Shadowmere. Cicero asked but was not given an answer. Not even sparing a glance towards the fool, Xan just stopped and took off his mixed pelt satchel. He dug around in the bag until his hand came into contact with a soft material. He pulled out the soft fuzzy object and turned around to present it to Cicero. A scarf. Cicero gave a happy giggle as he took the scarf and wrapped it around his neck. He nuzzled it and inhaled the scent of herbs and other incents the wood elf preferred to keep in his bag. With that, the two continued on ward to solitude. … A half hour later, another complaint was made… "Listenerrrrr! Cicero is hungry!" "…" Xan took a deep breath holding it in for a few seconds, and releasing it. He took off his bag again and reached inside its confines. He pulled out a paper bag and handed it to Cicero. "Oooo! Cicero gives many thanks to the Listener!" He pulled out a sweet roll and happily munched on the candy like treat. 'Almost there…' Xan thought to himself as they continued. "After gulping down the last few bites of the sweet roll, Cicero yawned. "Listener! Cic'" "AGHHHHHHHH! SPECTRAL ASSASSIN! I SUMMON YOU!" Xan threw his hand out casting Spectral Assassin and growled. A Blue Portal-like specter appeared before the two. Out stepped a blue glowing assassin spirit. "Greetings, Listener. I am here to serv-" "YOU!" The irritated wood elf paced up to the ghost "Take care of HIM! LISTEN to him!" He pointed to the jester as he sprinted a head leaving the specter and jester behind, both crying "Listener! Wait!" They ran after their Listener but didn't catch up to him. Though he was a spirit of the void, Lucien stopped and panted, as did the jester. The two stood in awkward silence after catching their breaths. "…Do you have any sweet rolls?" Cicero spoke up. "Um. No." The specter simply said. "You look pretty sweet to me~" The fool of hearts said with a devious wink. The specter blushed a darker shade of blue before looking down to the side and clearing his throat. "We should go look for The Listener…" xxxXxxx A/N: I just thought this up right on the spot